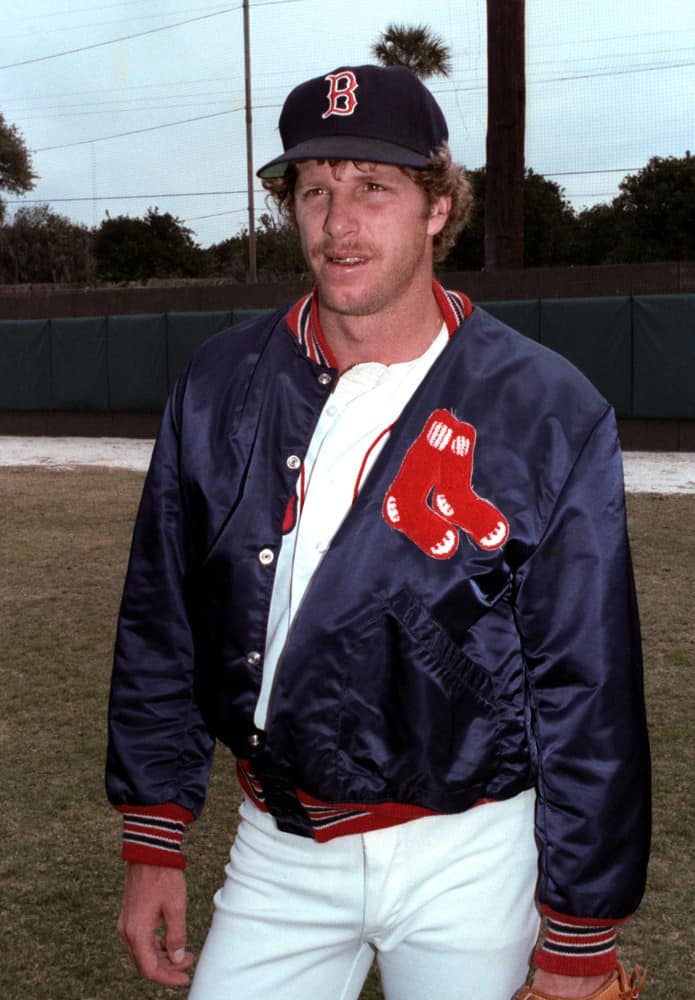 Major League Baseball has seen its share of outsized personalities throughout the years.

A player will announce themselves publicly by way of playing style, trash-talking, a flair for the dramatic in big games, or eccentric behavior.

The truly special ones will have a combination of the above.

During his brief MLB career, Mark Fidrych was known for his eccentricities and for his play.

Mark Fidrych burst onto the scene in 1976 by leading the American League in both ERA and moundscaping. pic.twitter.com/K1UyuFSgPq

His rookie season in 1976 was something to behold.

Seemingly out of nowhere, Fidrych came onto the scene and pitched so well that he became an All-Star.

What made him even more fun to watch was the quirky things he did between pitches.

Fidrych’s behavior drew laughter from fans and teammates alike while his game drew respect from opponents.

This is the story of the fascinating world of Mark Fidrych.

Mark Steven Fidrych was born on August 14, 1954 in Worcester, Massachusetts.

Fidrych developed a love of baseball at an early age when his father helped teach him how to play the sport.

He pitched a little during friendly pick-up games, but played shortstop his first year of American Legion ball.

The following year, a friend ended up beating him out for the position prompting Fidrych to ask his coach if he could try pitching.

Not long after seeing Fidrych’s natural ability on the mound, the coach asked why Fidrych didn’t ask to pitch before then.

“Because you didn’t ask,” Fidrych replied.

By the time he reached Algonquin Regional High in Northboro, Massachusetts, Fidrych was playing baseball, basketball, and football.

As his senior year approached, Fidrych had to be moved to Worcester Academy, a private school, due to an age restriction.

At Worcester, Fidrych played first base and pitched during his senior year.

He played well, but not good enough to be offered a college scholarship.

Thankfully, Joe Cusick of the Detroit Tigers was scouting the New England area for the team and stumbled upon a game where Fidrych was pitching.

Cusick and the Tigers liked Fidrych’s potential and selected him in the 10th round of the 1974 amateur draft.

As a bonus, Fidrych received $3,000 for signing with the team.

Quick Trip through the Minors

Shortly after signing with Detroit, Fidrych was off to the Appalachian League to play for the Bristol Tigers.

Coaches and teammates at Bristol took one look at the 6’3”, 175-pound Fidrych with his blond curly locks and nicknamed him “Bird” after the Sesame Street character Big Bird.

Here's Mark Fidrych with a William Shakespeare beard and some dumb bird. You're welcome. pic.twitter.com/pbFNldPdtz

Fidrych played 23 games for Bristol as a relief pitcher and posted a 3-0 record and a 2.38 ERA. He also struck out 40 batters in 34 innings.

In a matter of months, he went from the Class-A Florida State League where he was 5-9 and struck out 73 and then reported to the Montgomery Rebels of the Double-A Southern League.

With Montgomery, Fidrych saw action as a reliever in only a few games then was promoted again, this time to the Evansville Triplets of the Triple-A American Association.

As he rose through the ranks, Fidrych developed a slider to go with his fastball.

Both pitches were working well as Fidrych torched Evansville opponents for a 1.58 ERA, striking out 29 batters, and ending the year with a 4-1 record.

Even more impressive for the Tigers organization, Firych only walked nine batters in 40 innings of work.

Only two years removed from his high school days, Fidrych was called up to the parent club for the 1976 season.

He was originally listed as a non-roster invitee to begin the year and only appeared briefly in two relief appearances in the season’s first two months.

In the middle of May, Tigers starter Joe Coleman was scratched due to illness and Fidrych got the start.

To the amazement of his Detroit teammates and the fans in the stands, Fidrych didn’t allow a hit through the first six innings and ended up pitching a complete game.

#TBT to Mark Fidrych’s Fame in the Summer of ’76 when America loved the Bird as much as the Bird loved baseball. pic.twitter.com/p3aiC9dH9z

His stats for his first MLB start were one run on two hits and one walk for Fidrych’s first win.

Fidrych didn’t see the mound again until 10 days later when he received another start against Boston.

He would lose the game 2-0 on a two-run homer by Carl Yastrzemski, but Fidrych pitched another complete game.

To those who noticed, Fidrych pitched like he was late for a meeting.

During the season, well-known statistician Bill James calculated Fidrych as the fastest working pitcher’ in the major leagues with a time of two hours and 11 minutes.

That was approximately 17 minutes faster than the MLB average that year.

Furthermore, despite working so quickly, Fidrych’s command was on point.

Tigers manager Ralph Houk exclaimed that his rookie pitcher had, “unbelievable control with a fastball that moved.”

After the Boston game, Fidrych continued to roll.

He mowed down batters while also drawing attention to himself for his pre-pitch habits.

As The Sporting News noted at the time, Fidrych had quite the elaborate routine while on the mound.

“He talks to the ball. … He talks to himself. … He gestures toward the plate, pointing out the path he wants the pitch to take. … He struts in a circle around the mound after each out, applauding his teammates and asking for the ball. … And he’s forever chewing gum and patting the dirt on the mound with his bare hand,” said The Sporting News.

However, Fidrych later pointed out that he wasn’t talking to the ball.

Mark Fidrych on self-talk about the hitter. pic.twitter.com/2lHHaUVRwR

Instead, he was talking and guiding himself through the next pitch.

“I really don’t know what I do out there. That’s just my way of concentrating and keeping my head in the game,” Fidrych said about his routine.

The Tigers faithful, who had mainly stayed away from games due to the team’s 57-102 record the previous year, began to attend games when Fidrych pitched.

By late June, Fidrych was 7-1 and the toast of the town.

On June 28, the first-place New York Yankees came to Detroit and had a chance to witness the Bird in the flesh.

To the astonishment of the mighty Yankees, Fidrych proceeded to dismantle the New York batters on the way to a seven-hit, no walks, and one home run outing.

The Tigers beat New York 5-1, though many of the Yankees were upset with Fidrych’s histrionics by the end of the contest.

“Tell that guy if he pulls that stuff in New York, we’ll blow his —– out of town,” said New York hitter Thurman Munson.

“You want to send a line drive right through his head,” added second baseman Willie Randolph.

However, Detroit fans became further enamored by Fidrych and chanted “Go Bird Go!”  throughout the game.

Fidrych went to the clubhouse to change after the game when he was summoned back to the field.

As he got closer to the diamond, Fidrych could hear the Tiger fans.

Fidrych emerged and waved his hat, smiling and laughing as he did.

“There’s an electricity that he brings out in everyone, the players and the fans. He’s different. He’s a 21-year-old kid with a great enthusiasm that everyone loves. He has an inner youth, an exuberance,” said teammate Rusty Staub after the game.

By virtue of his 9-2 record and 1.78 ERA, Fidrych was named the starter for the American League in the 1976 All-Star Game.

He would give up two runs in the first inning of the game and be charged with the AL’s 7-1 loss.

Despite the loss, Fidrych kept the party going by continuing his stellar performance through the rest of the ‘76 season.

He also led the AL in complete games with 24.

After the season, Fidrych was named Rookie of the Year and came in second for the AL Cy Young Award.

It was calculated that, during Fidrych’s 29 starts for Detroit, the team pulled in over 900,000 fans combined.

When he pitched in Detroit, the Tigers drew over 600,000 fans total.

Furthermore, a Wall Street Journal analyst calculated that Fidrych was personally responsible for adding over $1 million to team revenue in 1976.

After receiving a pay raise before the 1977 season, Fidrych injured himself during warm-ups in Spring Training.

He was out until late May when he returned as a starter.

#OTD in 1977 Mark Fidrych appears on the cover of Sports Illustrated with Big Bird pic.twitter.com/7oSd2iuTAV

On July 4 of that year, Fidrych suddenly felt something off in his arm.

It turned out he had a torn rotator cuff in his shoulder that wasn’t properly diagnosed until years later.

He was voted to the All-Star Game again that season, but Fidrych declined due to his injury.

Fidrych’s Injury Leads to his Retirement

For Opening Day in 1978, Fidrych was named the starter and won during a complete game.

He also won his second start, but then fizzled the rest of the season and was limited to only one more game.

Mark Fidrych was as excited to meet his fans as they were to meet him, one of many traits that made "The Bird" special. pic.twitter.com/abS8JQruhY

The game and the win would prove to be the Bird’s last as a major league baseball player.

After toiling in the minors for Detroit in 1981, the team released him following the season.

Fidrych tried to come back with the Boston Red Sox in 1982 and 1983 in their farm system.

Unfortunately, his arm didn’t have the control it once had and Fidrych announced his retirement in June of 1983.

In 1986, Fidrych married and he eventually bought a farm outside of Northboro.

He also became a licensed commercial truck driver and worked with various charities.

Fidrych would sometimes surprise the local youth by showing up at baseball fields and helping kids with their game.

Today we remember the 'Bird', Mark Fidrych, who passed away 9 years ago today. Fidrych set the baseball world on fire in 1976 with his pitching and mound antics. Bird was one of a kind and is greatly missed @tigers pic.twitter.com/N3IQsXYbyh

Although his pro career was short Fidrych was never bitter, as he stated years before his passing.

“I got a family, I got a house, I got a dog. I would have liked my career to have been longer, but you can’t look back,” Fidrych said.

The Life And Career Of Mark Fidrych (Complete Story)